A new month is about to begin. October proved to be another active and busy month requiring us all to bring our “A” game. Our liability insurance came due just as we were applying to use Veterans’ Memorial Park for Remembrance Day and the Mall also requiring prove of liability insurance in order for the Legion to have a table at the Mall during the Poppy Campaign. Lots of questions to find the answers to and finally we were successful. Thanks very much to Holly, Judy and Tina for their help to resolve the many issues that just keep popping up everyday.

Thank you to all the members who are coming in to renew their membership. Thank you as well for understanding and having your exemption card ready as well as your ID card. It sure makes it nice when you are all so pleasant and caring.

A big thank you is extended once again to Don Hamilton, Rod Simmons and Eldon Wells for repairing with foam the side of the building where the bricks were coming away from the wall. As I understand this was the area where the new addition was added 50 years ago. They also kindly chipped in and paid for the filler. Rod and Don also hung the banner in the Canteen that recognizes the 100th Anniversary of the Poppy.

I would be remiss if I did not thank the bartenders for the great job they are doing during this difficult time. They are checking everyone who enters for the Exemption Card and for ID. They also record everyone’s name. So far there have been few problems for them. Diane and Amanda are to be recognized for the super job they are doing in the Kitchen. More and more people are coming to the Legion for lunch.

Although the planning starts in August for the Poppy Campaign and November 11th, the real planning starts the end of September. This year was a little more difficult to plan because I kept getting conflicting numbers. Finally on October 22nd, I got the final word from John Mahon, our AB/NWT Command President that we could hold it outdoors as long as we social distanced. Since we had laid the groundwork with everyone involved it was only a matter of contacting and telling them it was no longer limited to 20 people.

The Poppy Campaign tables came together once we got permission from Walmart, Canadian Tire and the Mall. Volunteers came down and signed up to work and the schedules today are almost full. Janice Allan and Barb Lemna looked after getting the routes ready for those volunteers. These route volunteers are truly amazing. Some of them have been doing the same route forever. Congrats and many thanks to you all. These routes are an important part of our Poppy Campaign.

Lorraine Lozo has her volunteers in to ready the poppies for all the schools in Medicine Hat. The Schools send in a number of stick-on poppies or pinned poppies for their particular school.

Carol Hayward and her 2 sisters put these requests together and we thank them for their help with the poppy campaign.

You are probably all wondering about November 11th. A city transit bus will be at the Legion for pick up at 10:30 for our veterans who need assistance getting to the Cenotaph. There is no service at the Esplanade I am sad to report. Hopefully next year.

At approximately 10:40 those wishing to parade to Veterans Memorial Park will form up in front of the Esplanade where we do every year. Col Robert MacKenzie will be our Parade Commander. The South Alberta Pipes and Drums will lead the Parade. Eldon Wells as Sergeant at Arms will lead the colour party. The parade will move towards the park and once in the park remain on the Cenotaph side of the cordoned off area. All the wreaths to be announced will be pre-positioned. It is important to keep in mind social distancing. There will be chairs available for our veterans who cannot stand for the ceremony.

Mark Ward and a quintet will play the hymns and Mark will be the bugler for Last Post and Rouse. Eric Kean will be our Piper for the Lament. The plan is to have the service live streamed thanks to Cooks Southland Funeral Home.

After the Royal Anthem, the Parade Commander will dismiss those involved in the parade one group at a time. The public will then be invited to come up and place their wreaths. Once again we are being cautious because of Covid and AHS rules on social distancing.

Please keep in mind that to access Schooners Pub or the Canteen you must show the volunteer at the front door only, your exemption card and your ID,

After the ceremony, entrance to Schooners Pub or the Canteen will be restricted to the following:

Once you are inside you cannot take drinks from the Canteen to Schooners Pub or vice versa. You can move from one side to the other but must not take a drink. You must enter the building, at the front door only, wearing a mask and you may remove it when you are eating or drinking. All AHS rules must be adhered to. For example, pulling the tables together or wandering from table to table is not allowed. Social distancing is a must at all times. Once you are inside you will notice that all the doors will be monitored to ensure that no one slips in without being checked for an exemption card and ID.

Pizza and salad are available for $8.00. This is the same price as two years ago. If you have any questions with regards to November 11th please call the Legion Office.

You will find the minutes of the General Meeting attached. I would like to share the following expenditures from the Poppy Fund that were passed at the meeting.

We are not sure when the canteen will open. We are short staffed plus we do not make a lot of revenue from the sales in the canteen. We have worked so hard over the past two years to pay the bills and build up our revenues and to keep your Legion open. We cannot afford to open the canteen at the wrong time and jeopardise the positive progress we have made financially. We must never forget we still owe $60,000 to the Federal Government, payable in December, 2022. This was part of a grant we received in the early days of the Pandemic that we used to pay the bills when we had no revenue coming in. We must continue to be frugal and make financially wise decisions.

Please do not hesitate to call if you have any questions or suggestions. 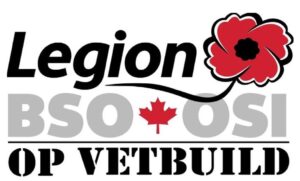